The STA Series has a wide variety of options, some are installed at the time of purchase, some may be added later. In addition, the operating controls and LCD display screen on STA200A through STA-800A Controls may be installed on the front or side of the Control, depending on your space requirements. As a result, each Control is essentially “custom-built” to your specifications even though it is assembled using standard Amada Miyachi components.

If you have questions about custom items in your Control that are not covered in this manual, contact Us using the phone or email.

A Voltage Monitor Option that allows you to compare results against high and low limits, and monitor either peak or average voltage. This feature allows you to select when the voltage is monitored, either during both weld periods (excluding up/downslope) or during the last cycle of each weld only, which is useful for welding to a specific resistance.

A Pressure Control Option (Force Input) that uses differential pressure sensors is available for up to eight channels. You may use this feature in a Force-Firing function (welds only when correct pressure is reached), or as a pressure monitor to see if air pressure is in the desired range. Force firing can reduce cycle time by eliminating the need to program squeeze time, and it assures that every weld is made at the optimum force.

High, low and Firing Force limits are programmed in pounds using front panel controls. Calibration is a simple 2-step procedure using front panel controls. Calibration correlates the pounds desired to the equivalent air pressure. This feature will check the air pressure for up to 5 seconds at the start of the squeeze delay period. If the force is within limits, the weld will continue. Otherwise, the weld will be aborted and an alarm will be triggered. If the pressure was out of limits at the end of a weld an alarm will be triggered.

Miyachi controls are widely-used throughout the following industries:

The following illustrations show a “typical” Control. Your Control may be different due to options that have been installed or to the physical configuration. For example, the LCD Display and operating controls can be factory-installed on the front or on the side of the Control. 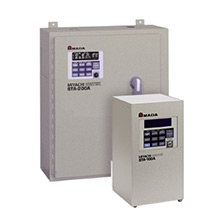