SiAlONs are ceramic alloys based on the elements silicon (Si), aluminium (Al), oxygen (O) and nitrogen (N) and were developed in the 1970s to solve the problem of silicon nitride (Si3N4) being difficult to fabricate.

As alloys of Si3N4, SiAlONs exist in three basic forms. Each form is isostructural with one of the two common forms of Si3N4, beta (β) and alpha (α) and with silicon oxynitride. The relationship between that of SiAlON and Si3N4 is similar to that between brass and pure copper. In the latter case, copper atoms are replaced by zinc to give a better and stronger alloy than the mother metal. In the case of SiAlON, there is substitution for Si by Al with corresponding atomic replacement of N by O, to satisfy valancy requirements. The resulting 'solution' (SiAlON) has superior properties to the original pure solvent (silicon nitride).

The fundamental structural unit of Si3N4 is the SiN4 tetrahedron, which is analogous to the SiO4 structural units in silicates. The tetrahedra are linked together into a rigid three dimensional framework by sharing corners. The Si-N bonds are short and they are very strong. This strong, rigid, compact structure is responsible for many of the important properties of Si3N4.

β-SiAlON is based upon the atomic arrangement existing in β-Si3N4. In this material, Si is substituted by Al with corresponding replacement of N by O. In this way up to two-thirds of the silicon in β-Si3N4 can be replaced by Al without causing a change in structure. The chemical replacement is one of changing Si-N bonds for Al-O bonds. The bond lengths are about the same for the two cases but the Al-O bond strength is significantly higher than that of Si-N. In SiAlON the Al is co-ordinated as AlO4 and not as AlO6 as in alumina (Al2O3). Therefore, in β-SiAlON the Al-O bond strength is 50% stronger than in Al2O3. Thus SiAlONs intrinsically have better properties than both Si3N4 and Al2O3.

β-SiAlON has the general formula Si6-zAlzOzN8-z where z varies between 0–4.2 and requires a sintering additive such as yttria (Y2O3), magnesia (MgO) or a rare earth oxide in order to densify. As a solid solution, the vapour pressure of β-SiAlON is lower than that of Si3N4 and as a result the SiAlON will form more liquid at a lower temperature. β-SiAlON is thus more easily densified than Si3N4 using normal sintering techniques. Furthermore, it should be noted that the lower vapour pressure of SiAlON reduces decomposition at high temperatures so that the SiAlON is thermodynamically more stable than Si3N4.

The β-SiAlONs produced by International Syalons use yttria as a sintering aid. When sintered above 1700°C elongated hexagonal shaped β-SiAlON grains are precipitated and grow in the oxynitride liquid phase formed from the sintering additives such as yttria, alumina, silica and aluminium nitride. Subsequently, on cooling the liquid phase forms a refractory intergranular glass. This produces the material Syalon 101. This material, with its elongated β grains, is characterised by high strength and toughness. 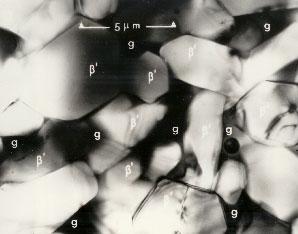 Micrograph showing the microstructure of Syalon 101.

The fine beta-sialon (β) grains surround small pockets of glass (g). It is possible through controlled processing to convert the intergranualr glass to yttrium aluminium garnet (YAG) which is a refractory crystalline phase. This gives the material better high temperature properties and the material can retain its strength at temperatures up to 1350°C. This material is available as Syalon 201.

The second form of Si3N4 with which SiAlON is isostructural is α-Si3N4. The stacking structure in α-Si3N4 is different from β-Si3N4 in that the long 'channels' which run through the β structure are blocked at intervals. This gives rise to a series of intersticial holes. In each Si12N16 unit cell there are two intersticial holes. In α-SiAlONs, Si in the tetrahedral structure is replaced by Al with limited substitution of N by O. Valancy requirements are satisfied by modifying cations occupying the intersticial holes. In this way cations of yttrium (Y), calcium (Ca), lithium (Li) and neodymium (Nd) for example can be incorporated into the structure. Consequently α-SiAlON has the general formula MexSi12-(m+n)Alm+nOnN16-n where x

The α-SiAlON phase region can be illustrated in the adjacent phase diagram, which shows the system based on the Y2O3 additive. This is a Jänecke prism and is the most convenient way to show the five component SiAlON system i.e. Me-Si-Al-O-N. The α-SiAlON phase region is the shaded region in the Si3N4-YN.Al2O3-AlN.Al2O3 plane. It can be seen also that the β-SiAlON solid solution, which extends along the Si3N4-AlN.Al2O3 line, thus forms a border of the α-SiAlON plane. This results in the possibility to form mixed α:β-SiAlONs. 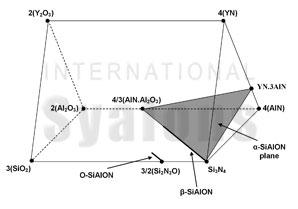 Phase diagram for the Y-Si-Al-O-N system.

α-SiAlONs are formed similarly to β-SiAlONs in that the α phase is precipitated from an oxynitride liquid phase. During the reaction the amount of liquid is gradually reduced as the modifying cation is incorporated into the α-SiAlON structure. Thus, in theory it is possible to form a single phase α-SiAlON. However, in practice some residual intergranular glass will remain after sintering, which as with the β-SiAlONs can often be converted to refractory crystalline phases. Thus by careful control of the composition and sintering cycle α-SiAlON ceramics can be formed with excellent high temperature properties. The α-SiAlON grains tend to have a small, equiaxed morphology which results in materials which have a lower strength and toughness than β-SiAlON. However, α-SiAlON has a higher hardness than β-SiAlON.

As described above it is possible to control the starting composition and the processing to develop mixed α:β-SiAlONs. Thus one can tailor the material to have a combination of the high strength and toughness of β-SiAlON and the high hardness and high temperature properties of α-SiAlON. International Syalons produce a mixed α:β-SiAlON which is available as Syalon 050.

The final form of sialon, O-SiAlON, is isostructural with silicon oxynitride (Si2N2O). The structure of Si2N2O consists of layers of Si3N4 rings joined by Si-O-Si bonds. In O-SiAlON, Al and O replace some Si and N atoms.

International Syalons don't manufacture an O-SiAlON ceramics. They are effectively a refractory with no benefits over β-SiAlON for example, other than cost, although the much superior properties of α- and β-SiAlONs provide much greater service life, thus offsetting any supposed cost benefits. 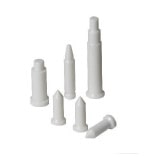